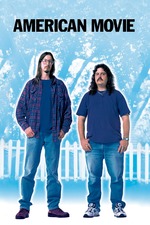 I guess some people think this is exploitative, but it and the people in it are so inspiring to me. I love Mark Borchardt’s obsession with film; how he talks excitedly about shooting on 16mm black-and-white reversal stock and then later spends months stuck at a flatbed, cutting his direct-market thriller together. Watching this at a time when everyone has an HD camera and edit suite in their pocket, it’s amazing to watch a group of people who probably have no formal training actually shooting, tracking, and cutting their own movie together. Using a camcorder to make a cheapo SOV version of Coven or Northwestern would’ve been copping out — they wouldn’t be movies.

I love every single person in this, and if you’re laughing at them and not with them (like they do each other), then that’s on you. Say what you will about someone like Mark or Mike, but they’re constantly trying to better themselves and the people they care for. To say that the filmmakers exploited them and should’ve actually helped them with their movie is nothing less than totally condescending. Watching this, I couldn’t help but imagine what it’d be like had Mark Borchardt made it big instead of someone like Kevin Smith. That’s the world I want to live in.

The Killer Must Kill Again