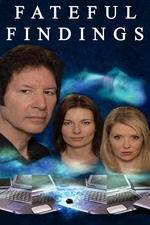 After taking in Silent Night, Deadly Night Part 2 and The Room in a single day, I figured I would the keep the crazy train rolling. My wife and friends were intermittently engrossed in a puzzle we'd been working on all week, but I found it pretty damn hard to concentrate with Neil Breen mugging it up a few feet away. Whenever Dylan, his Fateful Findings character, is just joshing around, being cute with one of his ladies or flipping burgers or whatever, Breen's stiff, forced manner is almost terrifying. It had me thinking back to Chuck Norris' failed attempt at loosening up in Hero and the Terror, except where Norris' blank stare comes off as simply vapid, Breen's has a glassy-eyed intensity to it that keeps you on pins and needles, waiting for a burst of worldburning violence to erupt. Maybe he only has that one headshot because anyone else who takes his photo is dead.

I compared Fateful Findings to The Room when I first saw it this past summer. While I assumed shotgunning the pair in the same night would bear out their differences, I only noticed more similarities (a seductive teen, infidelity, suicide). I still don't know what the wind/ghost thing is supposed to be, but maybe those parts where Dylan's yoga posing in the Steel Sak-covered room are him going into that magic stone he's carried since childhood, or maybe inside that book that's sitting on the pedestal in the hallway of the storage locker facility? I will continue to explore until I can figure it out.

As for my impromptu marathon, I threw on Birdemic for conversation background after the gang finished the puzzle, but it was Samurai Cop that finally sent our guests scrambling for the door. I didn't really pay attention to either of those, so I'm not logging them. I don't think my brain would still be functioning if I had.