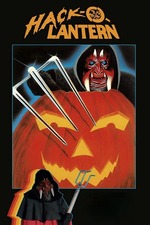 Here's some decent direct to video garbage, ideal for a dreary Halloween afternoon in anticipation of an unexciting, trick-or-treat-free night. Hy Pyke puts in a magnetically over the top performance as the Satan worshipping grandpa of young Tommy, secretly delivering pumpkins to the child despite his mother's (Katina Garner) histrionic objections to anything Halloween-related. Years later, while his sister (Carla Baron) plans to make it with her boyfriend during the town Halloween dance and their cop brother (Jeff Brown) prepares to patrol it, Tommy (Gregory Scott Cummins) is in the basement dreaming music videos for mid-'80s Metal Blade roster hopefuls. This is how he prepares for his initiation into Grandpa's Farm & Fleet devil sect, scheduled for that very night in their special diabolical barn. At the same time, someone in a goatmonster mask and evil ritual garb is killing the siblings' associates... can it all be related?

Despite a series of silly reveals toward the end, there's no chin-stroking pretense in Jag Mundhra's Hack-O-Lantern (the preferred title over Halloween Night or Death Mask). It's simply a cheap but effective delivery method for low budget gore and unnecessary nudity, including both from '90s adult film fixture Jeanna Fine. If you're a fan of oddball hammery, Pyke's slimy mustache twisting alone makes this worth a watch, whether he's pawing his own adult daughter on her wedding day or letting loose his indelible catchphrase: "The PARRRR is in the BLOOO-UUUD!" No evident research was put into the Satanic angle, as the cultists all say "I love you" to each other in ASL instead of flashing the Evil Eye passed down to us from R.J. Dio's grandmother. Speaking of metal, I sorta liked the band, Seattle's D.C. Lacroix... going by this song only, they're like a glammier, less kinky version of Bitch.

Such an occasionally boring brain cell killer from the back shelf of the video store is usually made or broken by its dumb tangents. Hack-O-Lantern has bushels of those, so clumsily overacted they generate enough interest to overpower the movie's complete lack of Halloween terror. And, if you're programming a double feature with a Terrible Grandparents theme, Mundhra's vaguely seasonal cheapie might be an ingenious way to follow this year's megahit Hereditary.