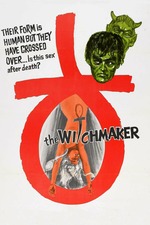 This week's challenge theme is very dear to me. Zine legend Michael Weldon's "Psychotronic Video Guide" was a staple of my college years, a reference book I read front to back like it was a regular novel, then kept on hand for years of unwieldy bathroom reading. I later snatched up Weldon's previous "Psychotronic Encyclopedia of Film" on eBay and gave it similar treatment. This obscure witchcraft shocker has a fairly complimentary entry in my yellowing copy of the Encyclopedia, but as was the case with John McCarty's mild praise for the bizarre Anguish in his "Splatter Movie Guide," it's easy to see how I never noticed this modest supernatural novelty among so many crazier-sounding flicks.

AKA The Legend of Witch Hollow, it stars Alvy Moore, no stranger to genre flicks (he later co-produced the similarly themed Brotherhood of Satan with L.Q. Jones before they went on to A Boy and His Dog) but better known for his role on Green Acres, as an academic paranormal specialist investigating the ritual murders of young women way out in the Louisiana bayou. Among his crew are a few students, a swaggering reporter (Anthony Eisley) and a fetching blonde "sensitive" (Thordis Brandt). The latter is the key to Moore's strategy and immediately attracts the attention of Luther the Berserk (John Lodge), the local witchcult leader who is clearly behind the slayings. Luther strikes a deal with a resurrected ancient witch that he will help restore her younger body and she will see that Brandt becomes part of the coven during their upcoming sabbat. That turns out to be a grand affair and the highlight of the movie, attended by such colorful conjurers as Faster, Pussycat... Kill! Kill!'s Sue Bernard, whose character can turn into a cat, her fellow Playboy Playmate Diane Webber as a lusty belly dancer and Los Angeles horror host Larry "Seymour" Vincent, just hanging out in the spooky sacrilegious sanctum for the food/drink/makeout orgy.

Like many vintage regional productions, The Witchmaker flits between boring procedural minutiae and unique variations on your standard horror flick. Luther is a tad starchy for a Satan worshipper and we are obliged to observe every dang second of his rituals. It's still more fun to watch him and the old crone plotting their evil than to sit with the professor and reporter while they discuss every witch-busting tactic, both before and after implementing it. According to Moore's scholar, garlic makes you invisible to witches, and giving them pig's blood instead of humans' will destroy them, which is really the sort of unheard-of folk science you want from a movie like this. It's shot as if it wanted to be dotted with gore and nudity, but never does more than suggest either, to the extent that in one astounding scene, Brandt has to run through the forest topless in slow motion with her hands covering her breasts the entire time.

The overlong result is far tamer than a 1969 drive-in movie about black magic should be, albeit one that would barely be cut if you stumbled upon it randomly on late night TV. That was still possible at the time Weldon compiled his iconic Psychotronic Encyclopedia, and would probably be the best way to catch this cuddly relic, although you would most likely drift off and miss the great gotcha ending.