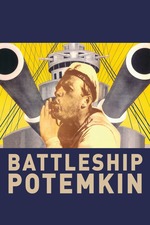 it’s kinda funny; i knew about the odessa step sequence/i’d seen short clips of it, but i never watched it, or this film in general, in its entirety. when i got to the, “all for one - one for all!” part, i kinda thought to myself, ‘man, how good is that staircase scene gonna be anyways? it can’t get better than this. this is just godly.’

it got even better. that whole entire sequence is just horrifyingly breathtaking and anxiety inducing, no doubt being one of the most influential scenes in film ever. not to mention, while (understandably) dated at times, the film really packs a strong punch in general - making its moods and tones embrace whatever emotion it wants to portray, then not showing any sorta fear when suddenly shifting and cutting the mood to a completely different one. pretty phenomenal, if you ask me.

i don’t know if i’d really go and watch it for pure enjoyment in the near future, but it’s definitely one of the greats out there not only in the 20’s, but basically in film as a whole. a pretty dope picture, if you ask me!