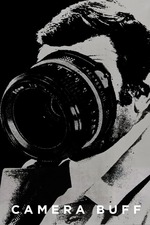 It's been a while since I've seen a Krzysztof Kieślowski film. I generally do not enjoy watching his works because they're just some of the sleepiest pieces of cinema I've ever come across. However, I may consider revisiting his works in the future thanks to Camera Buff. By no means is it a significant cut above the two movies that I've seen (The Double Life of Veronique, Three Colors: Red), but I think his messaging and arguments come off the clearest when he doesn't rely on these stylistic and glamorous grooves that identify his work.

Camera Buff or its original Polish name, Amator, sees a working man named Filip receive a new camera on the day his child is born. Where his wife is born with a new child, Filip is born with a new hobby. It soon becomes apparent that in exploring his fascinations with this hobby, the film begins to explore the superior, domineering power of cinema on everyone in the movie. The film has a twisted way of arguing Stalin’s extreme bias for cinema. We are treated to conflicts of obsession to the art vs. obligation to different institutions (family, film crew, self), the swift arm of censorship, the sanitized preferences for art, and so much more.

The film doesn’t feel sleepy despite its highly grounded approach because scenes never overstay their welcome. In fact, Kieślowski does his best to constantly remind the audience about the ways that each element in the film responds to our filmmaker. He is obsessed with realism, so he goes out of his way to film real-life characters at the cost of time and tranquility with his family. He blatantly disobeys his superior because for most of the film, he is after some form of success and glory in an otherwise gloomy life as a factory worker. Even when the film approaches credits, Filip’s desire for realism is still rooted in something personal… only that it is reoriented to make him be more honest with himself. In all these situations, it’s not that I am deeply compelled to say “Woah, that’s amazing,” but instead, I feel a sense of understanding and appreciation for how the film visually argues the power of cinema.

In summary, I enjoyed this film for what it has to discuss. I think there’s enough analysis to spend a whole day poring over the gift and misfortune of an 8mm movie camera.