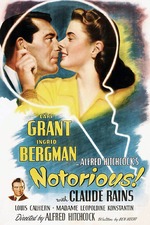 "There's nothing like a love song to give you a good laugh."

Alfred Hitchcock dials up the romance in this spy "thriller." Actually the tension only truly mounts in the last 20 minutes or so, and reaches its apex during the tensest staircase descent (until "The Untouchables" came along).

It's a solid and intriguing story that creates some interesting characters due to the circumstances of the plot. It is all greatly enhanced by the incredible MAGNIFICENT PERFORMANCE from Ingrid Bergman. This is one of her finest performances and it wasn't even nominated for an Oscar.

But - DAMN! - she gives a fantastic performance that is realistic, grounded, "lived-in" and utterly honest. She has a drunk scene that is one of the best, most honest ones I've ever seen on film. I was amazed at how good she was in this.

Cary Grant is her co-lead, and he's solid... but Bergman blows him off the screen. Even Claude Rains, who WAS nominated for an Oscar in his supporting role, can't keep up with the remarkable Bergman acting that she's layin' down.

Now don't get me wrong, Bergman is still being generous in her work onscreen and it's not a hammy or over-the-top performance in any way. It's just that whenever she's in a scene, all eyes are on her. Just magnetic in this film.

All that being said, I really enjoyed this Hitchcock film as it's not the usual murder mystery (which I DO love). It was well-paced, intricately plotted with characters full of complications. Nice.

Just loved this one.