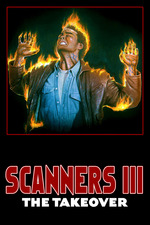 Well... it ain't a SCANNERS movie until somebody's head explodes.

So they make the Villain Scanner a lady this time around. Apparently, the filmmakers were very proud of this, and since the actress was the director's wife then all the better.

Unfortunately, they failed to consider that maybe, just MAYBE, they should have tried to come up with an original plot device besides the tired Good Scanner vs. Bad Scanner device that was used in both of the previous films.

Well, at least they stayed consistent with a lot of bad acting. And this movie's brand of "bad acting" was actually just "HAMMY acting." So they got that going for them... which is nice.

And... they blow up more than one head this time. So I guess they figured upping the head explosion count would work in their favor. And normally, I would agree with that particular Head Explosion Philosophy... but in this case:

They may have gotten AHEAD of themselves.

(I make no apologies for that)