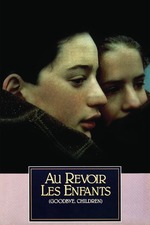 Oh, how this French film was so impactful to my early life when I first saw it in junior high. Au Revoir les Enfants was perhaps the first major foreign film I had watched that made a huge impression on me, completely absorbed by it that I wasn’t that aware for at least a quarter into it the historical significance of it. I was covetous of the fancy mother in fur and a big hair bow and somehow elegant sensuality, as she was sending her 12-year old son away from Paris and off to boarding school in 1944 wartime. There was something so classic, too, about the train ride with its simple shots through the window overlooking rural France; you could practically breathe in the wispy cold air as the train rolls along. Going ahead, the film was about children, and yet I was enveloped in something so adult.

An autobiographical film by Louis Malle at his most personal, he sees himself in the boy Julien (Gaspard Manesse) and his experiences at the Catholic school, taking in discipline, learning trades, making precarious friendships. To further defeat homesickness, Julien seeks to excel at such subjects as writing composition and piano that he knows he is good at, but is eventually upstaged by new student Bonnet (Raphaël Fejtö), who mysteriously doesn’t have any parents. They begin an unofficial rivalry, and are in a tussle when Julien’s mother visits weeks later. They will all go out to lunch, and we can see that despite the competitiveness of the boys the friendship is nevertheless cementing. At the restaurant there is an incident of Nazi patrolmen looking to escort a Jewish gentleman out of the establishment.

There is glee when the classmates have to duck into a cellar during air raids. But there slowly comes other events that heighten the seriousness of the cultural climate for Julien. “Stop being so pious. There’s a war going on kid,” he’s dismissively told. Julien catches on that Father Jean, and some of the other men employed, are hiding something at the school. In one particularly distressing scene, a simple nuance tips off information to a visiting Gestapo officer. There comes a mad dash for students to collect their things, to congregate at the courtyard for inspection. The final notes played, fixating on a pair of close-ups, have always been something devastating that I inescapably cannot forget, as so for Malle too; his horrifying remembrance became mine.