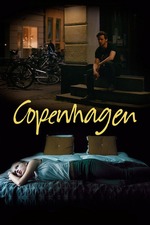 Rather a blind watch, this one, but very quickly it becomes obvious what the influences on Copenhagen are.

The 'travelling American falling in love with a local girl' idea has been done many times down the decades, and it's a set-up that I generally quite like. I guess the difference between this one and the rest is that the local girl in question is 14. Yeah.

I'm not really sure why Mark Raso decided to take on this rather icky age thing here because I think he could have played out this film almost exactly the same way if Frederikke Dahl Hansen was much closer in age to Gethin Anthony. There was actually no reason for things to be this way. Plus, Raso seems acutely aware of the 'delicacy' of this situation by having Anthony look a few years younger than 28 and Dahl Hansen a few years older than 14.

It suggests to me that he wasn't entirely sure how strongly he wanted to commit to this idea and if that was the case, why tackle it at all?! It's all very strange but there are still a lot of positives here. The formation of their relationship had some semblance of believability to it and the backgrounds of these two were played with quite a deft hand, explaining their behaviour and personalities.

This was especially important for Anthony, who really is a complete turd for the first half an hour until it becomes clear why this is. It also becomes a really attractive tour around a stunning city, which in itself always provides entertainment for an amateur architecture fan like myself.

The performances are not always completely convincing except from Dahl Hansen, judging her performance and character to perfection even when the lads in this film aren't on her level. A pretty good stab at a well-worn genre though and rather charming when you cut through its most questionable element.