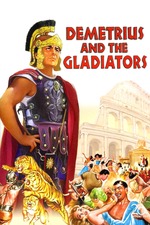 Demetrius and the Gladiators

Films I Watched On TV While I Was 'Working'

This is how much of an idiot I am.

So on came Demetrius And The Gladiators and the opening scene happened. I was quite excited because I didn't know Richard Burton and Jean Simmons were in it. Then I spent the next 45 minutes being confused as to why they weren't in it any more and how Delmer Daves had managed to persuade them both to do this cameo considering how big they both were at that time.

I didn't even have the brainpower to go online and investigate why this was and it wasn only when I stuck the programme description on to see how long this was that I noticed that this was the sequel to The Robe. Which I haven't seen. And the opening scene was from that. Terrific. As it turned out, I didn't need to have seen The Robe (I never really fancied it anyway), but why the hell is Film4 scheduling the bloody sequel without even showing the original beforehand? It's like when BBC2 used to show Howling VI: The Freaks about every 6 months throughout the 1990s without showing any of the other bloody films from that franchise.

Anyway, I'm not a big fan of sword and sandals films so this was probably about as much as I was likely to enjoy something like this. I spent most of it hoping that Caligula's assassination would happen early in the running time mainly because the actor playing him, Jay Robinson, puts in one of the most intolerable displays of hammy overacting I think I've ever seen. He was absolutely terrible.

I suppose it's in keeping with Caligula's reputation but come on! Just check out the opening five minutes here and you'll get a small sample of what I had to put up with for the best part of two hours. I know there are some who would probably derive some semblance of entertainment from that sort of performance but it just made me want to repeatedly run my head into the wall.

Otherwise the rest of this was alright. Victor Mature's hair (sounds like a house band for a Conservative club) is bordering on Kramer-esque at times and his performance mostly consists of him looking distressed or lustful, but never at the same time. Far and away the best thing in this, cast-wise, is Susan Hayward as Messelina - a terrific performance of a notoriously difficult character.

The fight scenes are not too bad although the outstanding one is an amazingly dangerous looking fight with a bunch of tigers that I'm sure would have PETA spluttering into their tofu baps if anyone attempted to do something like that these days. There's lots of religious guff, obviously, which was of no interest to me but it's an appropriately opulent looking Roman romp with a young Anne Bancroft to gaze at if you get bored, which you might.