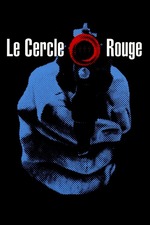 My first slice of Jean-Pierre Melville will hopefully mark a better effort on my part to watch more French crime and noir over the coming months. It's always been an area I have been interested in but never really immersed myself in at any point for one reason or another.

Le Cercle Rouge was a very good place to start and is an admirable film in that it manages to entertaining and very easy to appreciate despite the many issues, contrivances and occasionally unbelievable moments I found in it. I think that is the sign of a pretty great piece of filmmaking, really. Scenes such as Gian Maria Volonte, unrecognisable from his Sergio Leone collaborations, evading police capture by nipping through a stream in other lesser films would have had me furious. Here however, I merely raised an eyebrow.

I think in some ways it's to Melville's credit that there are so many moments like this in his film and that he is able to get away with them. I've read a theory that these are deliberate on Melville's part and that Le Cercle Rouge is more a commentary on heist films than an actual heist film itself. See, if that is true then that actually annoys me far more than the film itself. It's all very well for Melville to make such a film but as a viewer it doesn't necessarily do anything for me. If this is true then I would have much preferred Melville to have just made a great(er) heist film!

Even so, he pretty much has. The slow and slower build-up works absolutely fine as far as I'm concerned in a film such as this involving a crime such as this. I supposed some other areas of the film could have been afforded more time being dedicated to them, such as Yves Montand's personal 'issues' clearing up very quickly indeed, but Melville has it about right.

The heist is the centrepiece of the film, after all, and it deserves the depth of attention that it gets while the scenes itself are justifiably admired. I personally didn't think they were as interesting as some other areas of this film - I thought Alain Delon, saddled with a comedy moustache but magnificently poker-faced in the lead role, and his relationship with the Mob carried some excellent material, for instance.

You could almost make a case for saying that Melville tries a little bit too much with this film and that he could almost have made three separate films out of the material he has here. They all would probably have been very good indeed, too. The ending comes slightly out of the blue but is suitably dramatic even if the jump from dedicated if slightly questionable cop Bourvil feeding his cats to the end violence was slightly jarring.

Le Cercle Rouge is a very fine film indeed and clearly extremely influential. Even though I found too much to quibble with to mark it as the truly magnificent film that many understandably believe it to be, it's certainly left me very enthusiastic about future ventures into Gallic crime.