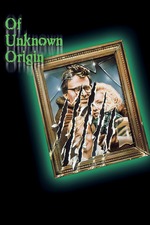 You Gotta Be Fucking Kidding: The 1980s Horror Month

Letterboxd failed me again by failing to inform me that Shannon Tweed was in this. What do I even follow any of you for?

George P. Cosmatos was a fun director and I honestly can't think of any film by him that I didn't enjoy. That run continues with Of Unknown Origin, a pleasingly sinister title for a film that equally pleasingly doesn't waste any time at all trying to come up with any dopey reasons about where this rat comes from and why it's so much smarter than Officer Murphy.

I think Cosmatos might be trying some kind of satire here, juxtaposing Peter Weller’s work life with his home struggles. Something about the rat race, I guess. But it doesn't work on that level at all because it's just too silly, but also a lot funnier in places than it may have meant to be.

Most of the comedy comes from Louis Del Grande as a janitor. The bit where he walks in on Weller trying out his new homemade weapon and just turns around and walks out was great. This film needed more of him. And how could anyone fail to be amused by Weller smashing up a whole apartment as a rat out smarts him every step of the way. Weller’s rat rant at the dinner party was a highlight as well.

Basically, any film where an animal has an unprovoked and illogical personal grudge against a particular person is alright with me.