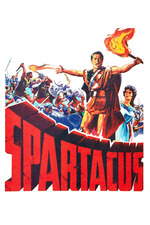 The only film where dear old Stan didn't have complete creative control - and it shows.

I'm really not normally a fan of this kind of film. Sword-swinging historical epics are not something I ever flock to for some reason and very few of them have really left me in awe of them. When I first watched this about 20 years ago, it did entrance me but I was left wondering after this viewing why that was. Because although I enjoyed it and found it to be a success in many ways, it never really grabbed me and evoked an emotional response as every single other Stanley Kubrick film I've seen to date has.

Kubrick was right to complain that Spartacus himself was too lacking in flaws. Not right enough that he should have disowned the film, the silly sod, but that's perhaps part of the problem for me. Spartacus is not a particularly interesting lead character. Strong, admirable and principled, absolutely. And played about as well as can be expected by Kirk Douglas, of course. But there's never any sense of any real vulnerabilities except for one scene he shares with Jean Simmons where he doubts the chances his army of slaves has against the Roman forces.

I'm not familiar with literature surrounding this man so it's possible that this could be an accurate biography of him. If that is the case, then it's a great example of why I'm always fine with dramatic licence. Many more interesting characters are littered around the film. Charles Laughton's power plays with Laurence Olivier transform this at times into a political drama of some substance, especially so when Simmons is placed at the centre of their tug of war. Peter Ustinov's twitchy slave trader always seems to be right at the heart of the best of the drama here too.

Then again, there are the occasional scenes and characters that are superfluous. The now infamous 'oysters and snails' scene between Olivier and Tony Curtis seems detached from the rest of the film until it's paid pointless lip service towards the end, and now seems rather silly as a result, while a twist involving Herbert Lom's go-between is as predictable as you are going to get.

The problem I find with these historical epics, and I had the same issue with Ben Hur, is that I almost spend a lot of the time wanting to throttle an answer out of it - "What is it you want to be?!" The running time is used to try and pack in far too many different ideas and plot-lines rather than focusing on one thing. I'm not saying that Spartacus should have been a straightforward action epic, even though its battle and duel scenes are exceptional. I'm saying it should have chosen one idea and stuck with it.

Even so, there's still so much to enjoy and admire here outside of a sag in the middle. All of the performances are enjoyable, especially the radiant Simmons and the terrific Ustinov. But Olivier really does come into his own towards the end of this film, subtly quaking in his boots for so many different reasons and already seemingly accepting his fate as he is shadowed by a certain Julius Caesar.

It seems strange to say this of Kubrick, but I really do think that somebody, in this case Anthony Mann, might have done a better job with this. Mann was already used to studio faffing and probably would have worked better in that position. Even so, Kubrick does an often admirable job and almost creates something sensational while working outside his comfort zone.