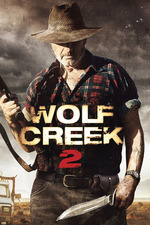 Clearly this is a project where I'm going to really like all the ones I expected to hate.

After really only just about tolerating the original, solely because of John Jarratt, I came into this with no expectations at all. And that is where the very best viewings can happen, isn't it?

It didn't start amazingly well, despite the amusement I had at Joe Scully from Neighbours popping in as an arsehole cop. But actually, him and his sidekick were part of the problem at the start. Why use two prick police officers to try and make us sympathetic towards Jarratt? What the fuck is Greg McLean playing at? By the time he's burnt Flick's dad alive and shot half the head off his young sidekick, natural order is restored and this film then goes....mad.

It really is completely mad, this film. I'm almost certain that's why I enjoyed it so much. It eliminates that long, tiresome stretch at the start of the original and gets right into the action right away, playing more on Jarratt's xenophobic tendencies than anything as he murders a German couple ("He's a non-smoker!") and then proceeds to spend most of the rest of the film tormenting Ryan Corr.

It's when he starts that pursuit that this film goes completely off the rails in far more entertaining style than I could possibly have expected. There's a brilliant section where all of a sudden it turns into Steven Spielberg's Duel - and then it starts throwing in flying kangaroos and, in a very good way, I started wondering what the actual hell I was watching! Suddenly this film becomes more like an action adventure.

It's not like it stops there either as Corr gets picked up, somehow, by some peculiar old couple and is just as much in a daze about it as I was. Just for a bit of fun, Jarratt then decides to pursue him on horseback and give him a good whipping. It's easy to criticise the long, drawn out way that the film uses Jarratt's pursuit of Corr to drive itself for about two-thirds of its running time - it's a pretty classic old horror thriller standard.

The difference here is that McLean has done so well at actually characterising Jarratt over the two films that I actually completely bought that he would play around with Corr like this. It's all a game to him, he's not necessarily in a rush to murder anyone. In horror films there's usually no reason for the main villain to bat around their victim like a cat playing with a mouse. Here, it's completely believable. It helps the film's cause so much as well.

For as much as there is a real lunatic spirit running through Wolf Creek, there's also a lot of thought gone into it and to a lesser extent the original. McLean plays with the vastness of the Outback brilliantly - in many ways he has the perfect place to play with for this kind of film as there is a lot more believability in how the two films end and how Jarratt can keep getting away with his crimes and never even fall under suspicion.

It does almost outstay its welcome during its peculiar interrogation / bonding scene but that's kept alive by the unpredictability of Jarratt and the fact you can't read him at all, and it climaxes with a dizzying 'escape' scene that once again trades on unpredictability. Jarratt is absolutely brilliant in this film. Easily one of the very best characterised villains in any horror film or series I've ever seen, he just about manages to stop him from sliding into horror film sequel self-parody territory, which in itself is a massive achievement.

It's such a shame that Wolf Creek 2 was probably dismissed out of hand by many because it's a horror sequel and, perhaps understandably, because it was expected to be a case of diminishing returns. But it is a huge improvement over the original, absolutely tremendous fun, and just a much better and, dare I say it, more intelligent film as well. I'm just as shocked as anyone, really.

Needless to say, this is one pommy cuuuuuuuuuunt who thought this was great.