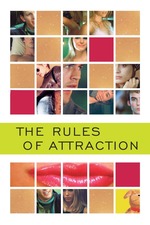 The Rules of Attraction

From the Corrupt Minds that brought you "Pulp Fiction" and "American Psycho"...

This could be the best demented and nihilistic films ever. This film is truly uncompromising in what it's portraying. It's not trying to say anything. Nobody wins anything. The audience doesn't get what they "want" out of this film. If anything, this film is plainly flipping the bird to the audience. And it's amazing. Quite possible the most fun I've had with an older film in sometime.

Avary was perfect for this film. This is only his second directed theatrical film, and it's a great leap better than his first. He left all that baggage his first film had and started fresh, only reviving the best things he knew how to do: 1.) Great Cinematography & Editing, 2.) Great Music, 3.) and 100% Nihilistic Insanity.

Great acting and writing also take this film to another level. The pacing was a little shifty in the middle, but other than that this film held on to me tighter than a python. I had no idea what was going to happen next, and felt as if I was in a constant state of giddiness just trying to predict how everything was going to go down (even though they show you the end[?] of the film at the start of the film).

This film just doesn't let up. There was a constant fluctuation between dark humor, awkwardness, stupidity, hatred, grossness, and danger. Though it wasn't a critic's darling during it's release, it was inevitable to gain a cult following. It truly is one of the best films that you've probably never seen.