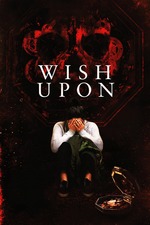 From the director of Mortal Kombat: Annihilation.

Wish Upon is just a dumb, lazily put-together mess that comes off more as a comedy rather than a horror movie.  Surprisingly enough, this movie's death scenes were a million times funnier than The Bye Bye Man's.  There's a scene where an old man is taking a bath, and he slips and falls and dies, and during that whole scene, I was waiting for the LifeAlert ad to show up. The score and editing in this movie looks and sounds like the editors went online and got some random city shots and random dubstep tracks; you'll know it when you see it.  Other than that, there really isn't anything to this movie that's worth mentioning.  It's just a forgettable movie overall; I don't even know why I'm still typing this.  I already forgot what happened.