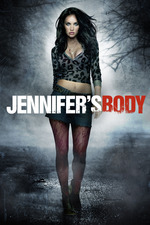 here are some assorted quotes from director Karyn Kusama and Diablo Cody from their commentary track.

KK: So, this was recently referred to me as “the scene” of the movie.

KK: Which I think is pretty fascinating.

DC: It is interesting that people would fixate on that.

KK: Yeah, um, because, I’ve been asked now, a couple times about whether or not we were just attempting to titillate male viewers and I’m so fascinated by it because I think there’s already so much assumption in that question, like, I think-

DC: That this could serve no purpose than to serve men or pleasure men.

KK: Yes, exactly. And in fact, I think the scene functioned in such a frightening way for both boys and girls, even if they claimed to only be titillated by it, there’s something else going on. We know too much about these characters now to just experience this as exploitation. Kind of makes me mad.

DC: Also, if this movie was about a platonic male and female friend who were having this same journey, I don’t think that anybody would see it as exploitative.

KK Yeah. It’s really fascinating, because particularly women I’ve talked to and more, articulate men have discussed this scene in the context of the suspense of it.

DC: Also, making out with a cannibal is suspenseful!

KK: Lesser actresses wouldn’t of know what to do with this dialogue, and I really feel like they made it true, funny, tragic, I just love watching them in this scene.

KK: Plus they’re so beautiful. like, they’re kind of more beautiful by looking dirty and fucked up.

DC There’s so much shit and vomit in this movie. It really makes me happy.