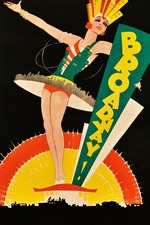 I think after this one I can pretty comfortably say that Pal Fejos was one of the foremost pioneers of American cinema during the silent/sound transitional period and it really is a shame that absolutely no one talks about him.

The technical wizardry that is on display here is just astounding at times. The sweeping crane shots, the slow push ins, the rotating camera, the collage like editing of the opening shots, the technicolor finale... it's all just incredible and it makes the film feel so exciting as you never quite know what Fejos is going to throw at you next.

It's really disappointing to me that "The Broadway Melody" won Best Picture for 1929 when it's such an atrociously boring and shoddy piece of shit, Fejos was doing work that felt YEARS ahead of its time!

However this film does have its issues. The story, whilst fairly interesting, isn't really anything special and the acting is incredibly wooden across the board. I'm willing to forgive that though considering how new this entire process was to them, but it's just funny that every guy in this film is super squeaky and talking exclusively out of the corner of their mouth.

So yeah overall, it's an alright story and poor acting mixed with some of the most impressive experimentation of the late 20's. I will definitely have to track down some of Fejos' later work if possible, the man is a technical genius for his time.