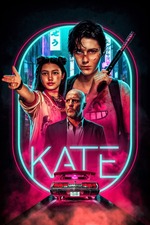 Unexpectedly the most ambitious action film of the year, merging the style of John Wick and themes of anti-imperialist Japanese cinema without ever breaking its boundary as a genre flick. The John Wick comparison is made often these days, and fairly, to any movie with a pencil or the color blue, but Kate completely leans into this similitude: it's literally about an unstoppable badass singlehandedly tearing apart an entire neon-drenched criminal underground, that blends several ultra-violent hand-to-hand fighting styles and exhilarating camerawork. But the Japanese iconography is also clearly intentional; obviously the film takes place in Japan, and there are several locations and fight scenes that seem specifically evocative of Harakiri – there is at least one shot that cannot be seen as anything other than a direct homage to Kobayashi's masterpiece, and all this is to not even mention that Kate's mission quickly becomes suicidal.

In essence, Kate invokes anti-imperialist Japanese cinema in order to reinterpet it into a violent takedown of the capitalist patriarchy. The battle is not between male and female, or old and young, or anyone except the upper and lower classes. When Kate realizes her life was a series of manipulations, she becomes aware that she was always part of a class of people that act as pawns in a game they will never win, working for a machine from which they constantly experience a net loss. Once this divide becomes clear, the battle is inevitable, and to the end.

Unlike most John Wick knockoffs, this is a film that understands combat, the intimacy, agility, and clumsiness of violent interactions. Mary Elizabeth Winstead eats her role alive, absolutely bodying the exasperated badassery that imbues believability and brings every moment to life. It's not an unpredictable movie from a narrative perspective, but it is uncharacteristically bold, a blood-spattered display of ruthless barbary in a rage against the machine. My expectations were relatively low, and they have been thoroughly shattered.