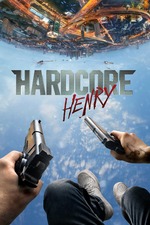 A desecration of everything and anything deemed tolerable, appropriate, or inherently cinematic; Hardcore Henry seems to have been created through the manipulation of a gaming controller rather than through the movement of actors and spaces, direction and cinematography, writing and editing. The audience's protagonist is unable to speak (which makes for some great physical comedy), its main "plot" revolves around a checklist of objectives, and the violence is without consequence - it's like an arcade game with one of those toy guns as a controller - until it's necessary for the "plot" to continue barreling towards another action setpiece.

But this is what Hardcore Henry wants to be. It isn't in love with itself. It IS itself. No pretension, no false satirical depths, just a 90 minute First Person Shooter video-game gimmick, shown through all the typical tropes and cliches of a genre frequently spat upon (mostly for good reason). It's a repulsive, woman-hating, ultra violent roller-coaster with enough explosions to make your head spin, but for pure viscera pleasure, I haven't seen anything like it. I mean, there's a scene with a big dude in diamond armor holding a fucking flamethrower.

Of course, that's been the main marketing angle, and after seeing the opening BO weekend, it's essentially a confirmation that it isn't for everyone. After an opening credits sequence that sets the tone immediately (like Deadpool but not sanitized), only a few 5 minute sections of exposition allow breathing room. The rest is action and more action and then some more action. Plus more action. The film starts and it doesn't stop until the satisfying final shot. Through the stabilized use of various GoPro cameras, Hardcore Henry is pretty incredible in terms of the seamless mix between practical and CGI effects. Parkour moments, chases over bridges, rooftop fights and so much more just bleed off the screen in such constant succession that you'll probably forget half of it by the time you get back home from the theatre.

It works because of this vitality. It's an experience *designed* to take the audience and inject sugary, obscene, delirious moments into their bloodstream. You don't come out of Hardcore Henry thinking about the message or the narrative as a whole. You either come out with a horrible headache or walk out after buzzing about the scenes where strip clubs, hallways, elevators, and city streets morph into graphic, splattering Jackson Pollock paintings. It isn't even a movie - I'd much rather have a controller in my hand - but the delights and insanity of it all left me breathless. And that was BEFORE the musical number.