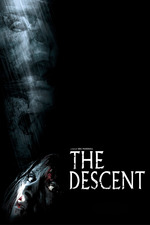 The Descent is absolutely impeccable. Dread is instant, continuous, and ever-present. With an impressively strong cast, Neil Marshall amps up the character right alongside the scares, keeping a brilliant balance between wondrous development and and frightful terror. I haven't seen anything so beautifully claustrophobic, enclosing the frame with suffocating amounts of darkness, surrounding the characters with toxic hopelessness and feverish pain.

Neil Marshall's direction is a roller-coaster in celluloid form, slowly climbing to the absolute limit before dropping into a state of horrific chaos and godlike revenge. It's as if the film itself goes back in time, with the primal instincts and the tribal paintings releasing a built-up rage deep within the collective unconscious. The direction is simply transfixing.

Although, the film works more as the sum of its parts, slamming the viewer with shivering imagery, chill-inducing music, and masterful editing. Marshall's film sneaks up on you, baring its intentions right before it goes for your jugular. A remarkable piece of work.