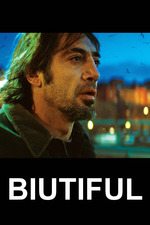 Javier Bardem is absolutely excellent. He easily portrays a man living a hard life that just happens to get harder when he is diagnosed with terminal Cancer. Just looking in his eyes you can tell Bardem's character is so tormented by the pain inside and around him. He does a great job portraying so many emotions even when he says so little. It's just an amazing performance. Much of the rest of the cast provide great performances as well, but it's clear from the start that this is Bardem's show. The director gets some very beautiful, or should I say "biutiful", shots in. The cinematography and direction looks stunning as well by helping convey the grittiness and hardships of Bardem's world. Helps add to the realism the film is going for, even if that is all the film is going for.

Sadly, while this is very well acted and directed, the writing is pretty lacking. I never felt like there was any real point to the film other than show the hardships that life has to offer as well as the misery within it and making the audience feel miserable in the process. Therefore, I never felt engaged with the film as much as I should have. I never felt interested since the film never pulled me in. I also have to say that I'm not sure if the film needed to be as long as it is given it's material. It could have conveyed it's message, or lack therof, in two hours had it not tried to shove all of this unnecessary and somewhat forced melodrama in it's plot.

All in all, the film is a bit of a disappointment, but Bardem surely does not disappoint. He is incredible and his performance alone makes this film worth a watch.