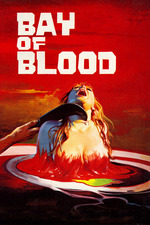 Mario Bava's A Bay Of Blood was initally reviled by critics for its excessive gore, questionable acting, and nonsensical plotting. These are perfectly valid criticisms, but no-one could have predicted the enduring influence A Bay of Blood would have on the slasher craze just under a decade later.

Whilst Halloween is generally reagrded as the first American slasher film, it's all (bar the Final Girl) here. The plot, such as it is, is fairly basic, albeit convoluted. After the death of a rich countess and the disappearance of her husband, various parties interested in the inheritance of her sprawling masnion descend on the bay of the title. As the various characters appear, the stage is set for murder, skullduggery, double crossing and the dispatchment of more than one nosy neighbour.

In actuality though, the plot takes a back seat to the set piece murders, of which there are many. From the impressively dialogue free opening double kill onwards Bayis an indiscriminate slaughterhouse. Of course, this is where its true legacy lies, even to the point of two murders cropping up almost shot for shot in Friday the 13th Part 2 some eleven years later. There's also a detour involving a group of travelling teens which only serves to bump up the bodycount, but would also prove an accurate representation of slasher films for years to come.

Bava also finds the blackest humour in amongst the claret splashing. One scene in particular that stands out is the amusingly absurd image of a corpse floating in the water, arm outstretched, towards a naked swimming girl. I don't know what that says about me, but still.

As with all Italian films of that era, Blood is somewhat of an acquired taste. However, if you can get past the awkard dubbing and stilted performances, and want to see where it arguably all began, there is a lot to love.

There's also a doozy of an ending that I wouldn't dream of spoiling here.