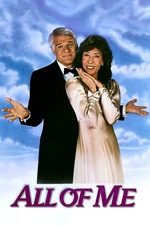 Martin and Tomlin have a great dynamic, working really well together and managing to sell a potentially over-the-top premise by really committing to their roles. As the two central characters gradually warm to each other and experience living life in their various ways the film becomes quite endearing, with Roger reevaluating his priorities and Edwina opening up to new experiences, and the leads really manage to sell their respective arcs.

Martin gives an incredibly physical performance, showing the different halves of Roger’s body being controlled separately, and he brings a lot of energy to the film that holds it together. It’s more story based than his earlier collaborations with Reiner, and feels like a transition point between his zanier roles and the more layered performances later in the decade.

There are some similar ideas to The Man With Two Brains, especially the body swap aspects, and while this film isn’t quite as inspired or joke-heavy it feels a little more developed, giving us further time to get to know the characters and fleshing out the situation more. This is the first film Martin didn’t co-write, which brings a different style to the humour, although sometimes at the cost of the madcap energy of his previous three films.

Even if it’s is more conventional than Martin’s earlier projects, the film is an enjoyable and fun, though it takes a little while to build up enough momentum to get going. It does begin to run out of steam towards the end, as the humour becomes broader in the third act, relying more on stereotypes and mix-ups, making it start to feel a little laboured and contrived, but manages to find its footing again for a sweet conclusion that wraps it up well.

All of Me sometimes gets a little too formulaic, and doesn’t always work, but has enough charm and entertainment value to make it a fun watch.