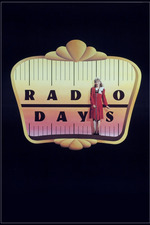 Woody Allen writes, directs and narrates this comedy-drama about the Golden Age of Radio and the family whose lives are framed by it, starring an ensemble cast including Julie Kavner, Michael Tucker, Mia Farrow, Seth Green, Josh Mostel and Dianne Wiest.

This is one of Allen’s warmest and most nostalgic films, looking back on the time with a great deal of affection. He really manages to capture the spirit of the era, crafting a sweet and well observed series of interlinking stories that combine to produce a tapestry of memory and wistfulness.

The Purple Rose of Cairo explored the collective magic of the silver screen, and here Allen looks at the similar sorts of ways that radio brought everyone together, from the thrilling derring-do of the adventure serials to the infectious joy of the music, each affecting the characters in a different way.

This has to be one of my favourite film soundtracks, an incredibly evocative mix of the era’s music that helps to set the tone and move the events forward. I loved the scene were the family all dance to “South American Way”, which seems to sum up that idea of the shared experience radio, or indeed any medium, gives people (and it’s been stuck in my head ever since I listened to it).

The cast are a big part in why it all works so well, each having a moment to shine, especially Wiest’s lovelorn aunt, who gets some of the best scenes, and Farrow’s turn as a ditzy aspiring star, which adds a lot of humour to the story.

I thought Kavner and Tucker were especially good as the parents, making their characters fleshed out and believable in a way that grounds it all, playing off of each other really well. Allen’s witty narration holds it all together, linking up the various threads and injecting a lot of wit, as his character muses on his childhood and the people around him.

As it’s structured around a series of vignettes there isn’t really much of a plot, which makes it feel a little unfocused in places, but there’s enough of a through line to make sure it all flows well. Being based around these semi-sketches does mean that some parts are stronger than others, but it has a breeziness that stops it from dragging and keeps the pace up, making it very watchable and engaging.

While Radio Days is quite slight, and might sometimes be trying to cover too much ground, it’s a thoroughly charming and sweet ode to a bygone era that lives on through a funny, clever and at times poignant series of vignettes.