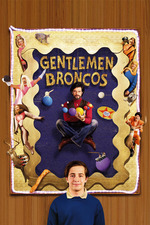 Before I get into anything else: this film features Jemaine Clement as a pretentious science fiction writer who talks like Alan Rickman and gives a writing workshop where he lectures teenagers about naming conventions in the genre. I believe it is worth watching Gentlemen Broncos for these reasons alone. Jemaine Clement is incredible in this film. Gentlemen Broncos is characterised by OTT gross-out humour, deadpan idiosyncrasy, and some really cheesy needledrops, which won’t be for everyone, but really worked for me. MOSTLY. (Rant incoming.)

BUT. I’m struggling with a particularly nasty line near the end of the movie which kinda threw me, which made me question whether the reason our protagonist is pissed off with the antagonist is different to the reason that I was pissed off with the antagonist, and furthermore, whether the film is taking a position I don’t agree with, or merely pointing out a flaw/POV of the protagonist.

Are we supposed to be laughing about Brutus being queer-coded because gay people are a joke (my concern after the word ‘tranny’ made an unexpected appearance!) rather than how different Brutus and Bronco are at the hands of their respective authors, despite the story being the same (my take pre-‘tranny’.) Or is Benjamin’s abject horror at the camp, lusciously-locked Brutus meant to be specific to him and not us, the audience? Does it work if we think of him in context, a teenage boy quite particularly and peculiarly positioned in terms of class, religion, and with a certain heteronormative concept of masculinity that’s all the more compounded by the loss of his father at an early age?

Am I overthinking this, a movie where a snake has diarrhoea all over a man’s white tracksuit, where projectile vomit is weaponised, and a woman gets shot through her bra’s chicken fillet with a shit-dipped rat poison dart? Nah. I am thinking about it THE CORRECT AMOUNT. And despite its flaws, I still think it’s doing a lot that’s worth celebrating and thinking about. As I’ve said, it touches on class, religion, gender politics. Considering how absolutely terrible Yeast Lords is, it also sorta works as a satire about adaptation and intellectual property (side note: is it still called intellectual property when it is demonstrably the dumbest shit ever?!)
Marks for ambition!

FINALLY I have long been agin Michael Angarano and I wish literally anyone else played the main character in this movie because I guarantee it would have made it 10% better. I guess he’s playing a sad-sack straight man because everyone else in the movie is so weird, and maybe that necessitates a certain total absence of charm or energy.