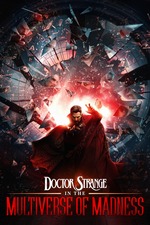 I. Simon’s review published on Letterboxd:

Drag Me to the Multiverse

Against all odds given the (seemingly) hectic production, certainly the first film in this franchise since CAPTAIN MARVEL to be actually directed. Whether it be the performances, the camerawork and editing, the character beats and staging, the wacky tonal shifts, or even the earnestness, this is unmistakably a Sam Raimi film, to my utmost shock. And yet, this is also still very much an MCU script, including some of that trademark “humor” (albeit thankfully far more toned down than usual), macguffins, and directly building off of previous MCU entries, specifically WANDAVISION. So you have a film that is both very Raimi and very MCU—and the coexistence is fascinating to say the least. In most cases of a distinctive filmmaker helming an MCU film, it results in their voice getting suffocated by the Marvel machine. In the case of Doctor Strange in the Multiverse of Madness, however, it is a shockingly cohesive melding of the two.

And fortunately, to my pleasant surprise, Raimi very much wins the battle here. Not only is this filled with so much of his signature personality and easily the best action set-pieces in the entire MCU, but Raimi also approaches Michael Waldron’s script from a unique angle. Instead of being a Glup Shitto nightmare a la NO WAY HOME like I feared, Doctor Strange in the Multiverse of Madness is surprisingly one of the most character-focused and morally driven MCU entries. It takes that character choice made by Stephen Strange in Infinity War and makes it into his whole arc, one that feels very much like something penned by the showrunner of the fantastic first season of LOKI in retrospect. Because of this, Strange as a character finally comes into his own, and so does Benedict Cumberbatch’s casting in the role.

And while Strange fortunately doesn’t feel like an afterthought in his own sequel like he did in his first film, I’d be lying if I said Wanda’s characterization isn’t what makes this film work as well as it does from a writing standpoint. What in the hands of most would’ve merely been WANDAVISION’s leftovers ends up being a classic Raimi villain and one of the most sympathetic and layered villains in the MCU — let alone the first time Wanda has ever been allowed to be an actual character in this franchise — and that’s largely due to Elizabeth Olsen herself. Raimi’s choice to direct Olsen similarly to how he directed Alison Lohman in DRAG ME TO HELL is absolutely genius, resulting in not only what is easily Olsen’s best performance in that role to date, but also her best film performance since Martha Marcy May Marlene. I so hope Raimi casts her as the lead in a future horror film of his.

I can’t say this made me hopeful for the future of the MCU given how dire their upcoming slate is looking to be (outside of Guardians of the Galaxy Vol. 3 at least), but given that I both greatly disliked the last six MCU films prior to this and had increasing pessimism leading up to the release, for one of these to actually be a real movie with directorial personality again for the first time since March 2019 is so refreshing. The sheer visual imagination on display was enough to win me over alone. That there was also engrossing character work and an interesting moral conflict feels like a cherry on top.

In short, the biggest surprise of the year thus far. Absolutely terrific.

I. Simon liked these reviews

I. Simon is using Letterboxd to share film reviews and lists with friends. Join here.