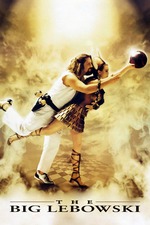 There are films out there that so staggeringly unique, so startlingly audacious and so incredibly pure that deserve to be watched again and again. The Big Lebowski is one of the few that deserves every second of your attention and demands countless viewings. It's designed to be a comfort movie, and is self-conscious in this aim; while other films come about naturally in this way, this thing forces you warm to it with everything it's got, and is remarkably successful every time.

The plot, while undeniably random, rambling and excessive, is the stuff of legend. A homage to 40s noir but shot through the squinted and hallucinatory gaze of a stoner, the Coen Brothers have created a world and story so imaginative and utterly insane that it couldn't be anything other than their own. Spiralling out of control from a rug that has been 'micturated upon' and involving porn barons, nihilists, amphibious marmots, psychotic Vietnam veterans and legendary TV writers in an iron lung, it's a sprawling canvas of cameos and craziness, painted with dazzlingly funny one-liners and vibrant characters. This may be one of the greatest stories ever told.

The cast match the Coens' vivid flair with wall-to-wall iconic performances. Out of the cameos, John Turturro is dangerously hilarious as everyone's favourite cinematic paedophile, Jesus Quintana, but Peter Stormare and David Thewlis manage to raise their fair amount of titters in their limited screentime. John Goodman is on fire here, and rakes in the majority of the belly-laughs with his tactless and possibly evil best friend to our protagonist, but no one can quite steal the show from the latter. Jeff Bridges walks like a Colossus in the guise of the shaggiest of dogs among a cast that are nothing less than phenomenal, and his performance is iconic in every sense of the word. A touching, hilarious and utterly lovable character, Bridges brings the heart and warmth to the tale, providing the centre for one of the most likable films ever created.

The Masters of the Off-Beat are at their peak here. The Coens have created a piece of pure entertainment for the ages with all the twists and turns you could expect from an entire genre and all the laughs and guffaws you could expect from another. Cozily warm, gut-bustingly funny, stunningly audacious and wonderfully odd, The Big Lebowski is and will be my personal yardstick of cinematic comedy through the years.