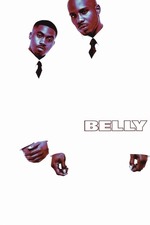 'cause none of us are tryna play the victim
any disrespect then retaliation, instant

a loud thud is heard as a traffic light turns red and tommy cruises past it, the sound seemingly discordant with the gravity of the act. in a film focused on murder and drug-pushing, crimes that get you killed or locked up for life, hype williams declares that for a black man, it's all the same as something as innocuous as violating traffic laws. tommy's ensuing pride, "i'm out here smoking weed, speeding, all that, dawg. fuck that. that's me. untouchable", makes this all the more clear. BLACK* masculinity, as observed by black people, as depicted in belly, is shaped by the need to transcend the dehumanization intrinsic to blackness / the structures that make it so. the violence inflicted on / by tommy and sincere is intended as a reclamation of power. instead, it locks their community into cycles of terror where the real enemy is obfuscated. kisha's cries, "look what you did to me! i hate you. i hate you", as she repeatedly strikes her assailant, lament her forced transformation into a killer by misogynoirist black men who never had the clarity to direct their anger and confusion to its source. by momentarily achieving this clarity, kendrick echoes her sentiment on his address to white people, the blacker the berry:

you sabotage my community, making a killin'
you made me a killer, emancipation of a real nigga

belly ambitiously attempts to show that a release from these fatalistic destinies, in which you kill or are killed, exists. the question is whether hype williams meant to portray sincere's escape to africa and tommy's newfound knowledge of self / the forces that hold him captive within his being as equal releases. rev. savior's speech to tommy provides a potential answer:

they use what you fear against you. your fear of death. your fear of imprisonment. where in this world is anyone safe from death? you see the lies you've been told? the path you take is not your own.

sincere keeps on running, searching for release in a continent that mirrors his own suffering, while tommy's life flashes before his eyes—he sees the ways he has been instrumental to his oppression and that of everyone around him. through accepting rev. savior's embrace, through not running, he is freed from the fear that had seeped into his skin.

*if you, a man/individual of any other race, think this film applies to you or that you can somehow relate to it, fuck off. where do you get off?