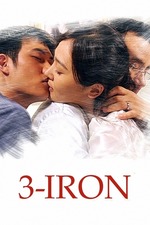 Kim Ki-duk you floored me, and not for the first time, and probably not for the last time. You accomplished something I thought would be impossible or at least not very likely, you made a film that became my favourite Korean film of all time. Burning, The Handmaiden, Memories of Murder and Parasite…. they all kneel before the undeniable beauty that is 3-Iron.

I just finished the film, so this is not the ideal time and place to be reviewing the film, but I will try my best. I guess it is time for a plot synopsis, the thing I hate the most about reviewing a film. It is about two troubled people that build a strong connection with each other, that is all I will say for now. I would rather keep it as vague as possible, and rather delve into my personal experience with the film, and Letterboxd has a synopsis for the film, which you probably have read already as you are here reading my review.

What are the things that make 3-Iron such a special film? I could start with the ingenious shot composition. I knew beforehand that Kim Ki-duk knows where to put the camera as the cinematography in his other film, The Isle (2000) is phenomenal as well. There are many low angles, and at least to me, the word “low angle” brings the Japanese master Yasujiro Ozu into mind, but the low angles in 3-Iron are not reminiscent of Ozu, the low angles are way steeper than in Ozu’s films, and they are often used to capture the environment. When the camera takes other angles, it is usually when the focus is on the characters. The still shots are beautiful yet there is quite a bit of camera movement as well.

The film has very little dialogue, the two main characters barely say a word in the film. Therefore, the cinematography is an important storytelling device. The camera needs to capture the emotions of the characters, and give us viewers the possibility to interpret their thoughts. Not to mention that the director needs to be able to put the characters in the right spot, while creating visual poetry through symbolism to us, the viewers to give an idea about the films themes however vague the idea might be. And vague it is, there are only a couple clear visual hints that give us some indications about the themes of the film, these visual hints are for example, expressed through the movements of the characters. This brings us to the performances of the film. Lee Seung-yeon as Sun-Hwa and Jae Hee as Tae-Suk are both enthralling in the film, while the supporting cast especially Kwon Hyuk-ho as the husband excel in their roles as well. Expressing emotion as you can imagine can be very hard without opening your mouth, and without having any exposition or narration to fill in the details.

We can see from the faces and actions of both of the main characters that they have troubled pasts that affect their current actions. We see things happen to Sun-Hwa that affect her behaviour and psyche, and they make her go mute. You might think that this film is just one of those simple “two troubled people fall in love with each other eventually finding happiness” films, but it is far from that. They commit actions that can be seen as immoral and the actions definitely go against common moral norms and laws for that matter, yet we still uphold them to be decent people as they are portrayed in quite of a humane and emotional way without resulting in unnecessary melodrama. We see that Sun and Tae have a very deep connection as they are able to communicate and function daily without verbally communicating with each other. They have a mutual understanding of other's needs and feelings, which makes them happy even though they cling onto the past.

The film is all about the concept of time and memory. In order to have a meaningful life, we need to create memories that will be remembered. We need to take risks and live on the edge to be memorable. Mundane daily life with or without a college degree will not be remembered. Obeying the set norms and rules is forgettable, they need to be broken to create something that will last. Memorability and meaning comes from other people, their reaction to your reckless behaviour is what makes your behaviour memorable. We need to enter their spaces, their thoughts and their lives to create memories, and we need the people to remember us. We are hungry for understanding what makes other people tick, and at the same time, we want to be understood by other people, and we want to understand ourselves.

Here comes our obsession of taking pictures. These actions and events need to be photographed as a proof of these events happening. After all one’s memory cannot be trusted, and by taking pictures, we validate our banal existence to other people making it seem more exciting than it actually is. As our memory cannot be trusted, can the pictures be trusted then? A picture is just a shot of a particular space in a nano second of time. It is from an individual’s perspective that has its subjectivity and biases, while the person seeing the picture has his or her own biases and subjectivity as well. Therefore, in the end, what does it mean to remember something, and to be remembered? What is actually real and what is just a dream? What is the value of pictures and art? How valuable can an individual perspective be and how and by whom is this value measured?

All in all, this film completely blew me away. It changed my perception of cinema, it reminded me of why this artform can be so rewarding yet challenging. It made me write my first ever “proper” review. I am thankful for the film's existence, I am sure I will return to it, although I am dreading the rewatch a bit as I do not know if it can have such a profound emotional and soothing effect on me a second time, but as the film is very complex, rewatching is the only way to get a better grasp of it.