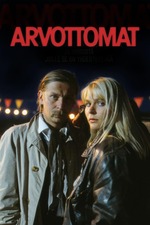 You are dying to watch a specific film for weeks. Trying to track a copy to watch. Failing. Not succeeding. You finally find a copy to watch, you are extremely happy. You watch the film. You are completely blown away. This is the experience I had with The Worthless (1982) by Mika Kaurismäki, the older brother of Aki Kaurismäki, and who many might consider to be the lesser filmmaker out of the two Finnish brothers. This was actually my first Mika film, I have seen almost all Aki films though, and Aki is one of my favorite filmmakers. To my surprise, The Worthless became my favorite Kaurismäki film even though it is by the "wrong brother". Is the brilliance of the film due to Mika, or the fact that Aki co-wrote the film and even acted in it? It is probably both, it definitely feels like an Aki film, but less minimalist and more action packed.

The film has Aki's style of humour although less refined and more in your face, which I actually ended up loving. The film has far more dialogue than the average Kaurismäki film. The dialogue at times is very funny even though they use many cliches that can especially be found in Hollywood. I like to think that using these cliches was purposeful, and all these Hollywood tropes and cliches mixed together with the Finnish deadpan style makes an absolutely killer combination. The choice of using so many of these cliches and tropes could be that they were actually making fun of them, or maybe they wanted to show that even the greatest cliches can be made into something brilliant. Or perhaps, it was just the immaturity of them as filmmakers, but who cares, I loved the film. The film definitely has a film-noir and a French crime film vibe to it as well, largely resembling Jean-Pierre Melville's crime films. Matti Pellonpää even has a trench coat!

How can a mix of so many different things work? Well, it works, because the Kaurismäki brothers are very talented even when they were young. Plus it does not hurt that you have the Kaurismäki regular Matti Pellonpää as the leading man, this role is somewhat different to his other roles as in this one he actually talks a lot, and makes constant jokes, whether funny or not. Pirkko Hämäläinen and Juuso Hirvikangas are wonderful as well, but as per usual, no one can beat Matti Pellonpää, who has slowly but surely become one of my very favourite actors!

Finally, I could just quickly mention the brilliant score of the film and the beautiful cinematography. The music has couple of typical rock and roll tracks as every Kaurismäki film must have, but it also has a score by Anssi Tikanmäki, which makes the film even more thrilling than it already is. The cinematography is very reminiscent of the later Aki films, there are many wide angles, and most of the time, the camera stays put aside from some instances of steady camera movement. I have always really liked Kaurismäki's cinematography, which really resembles many other European greats and Yasujiro Ozu as well, who is a big inspiration to Aki, and probably to his brother as well.

As you probably got from my review, you should definitely watch this film. It requires some digging to actually find a copy, but at least the English subtitles were really good, and that is coming from a native Finn. If you are willing to do some digging online, then I highly encourage you to watch this film, and if you like the more famous brother that is Aki, I think you will love this little gem from the other brother.