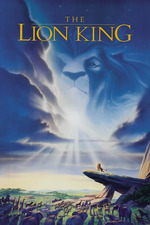 I know a I've been logging in many rewatches recently. I'll be back to films in my ever growing watchlist soon enough. I swear.

But today is the opening night release of the "live-action" remake of Disney's smash hit original. A film, that along with Toy Story, E.T., Aladdin all played a important role in my creativity, immagination, and loves of animation and filmmaking. A film that really needs no requirement for a remake. But our Mouse-Eared Overlords dictate it. So instead of giving my money to what I and others find to be an unnecessary retelling of one of Disney's finest (I'll let the others be the problem there), I decided to pop in my Blu-Ray copy and revisit one of my childhood favorites that's stuck with me instead of seeing it in theaters. And upon re-watching it and after 25 years of it's original release... Yeah. It still fuckin' slaps on all fronts.

While the story is mainly a lose African Pridelinds set retelling of William Shamespear's Hamlet (featuring lions, hyenas, and other wildlife) the story overall manages to be one of It's own. Both one that nicey interweaves parts it's Shakespearean counterparts (as well as a touch of Kimba The White Lion in bits) with it's own setting, tone, messages and identity all it's own. One of learning from the past and taking responsibility when the time calls for it. Not letting trauma define you and hold you back from being your best self. With incredible characters you don't forget. Lots of cute comedy (Disney used all they're best comedy for Aladdin), wonderful iconic songs (thanks to ya boi Elton John) , Hanz Zimer's best score, and good drama. All with a familial tone great for children and adults to watch. Over and over again for generations to come.

The voice acting is all great across the board. As a voice actor myself, I can say these voices stuck themselves in my subconsious. Matthew Broderick, Jonathan Taylor Thomas, Jeremy Irons, James Earl-Jones, Moira Kelly, Niketa Calame, Nathan Lane, Earnie Sabella, Robert Guillaume, Rowan Atkinsin, Madge Sinclair, Whoopi Goldberg, Cheech Marin, Jim Cummings, Zoe Leader. Each and everyone, big or small, plays their parts damn wonderfully.

I also really love the animation and art. Seeing this after so many years on Blu-Ray remedied me howv immersive this was for 1994. And also up till today. The motions of the animals are wonderful detailed and real. Even when they get to be expressive and cartoony, it's all fluid and gorgeous. I especially love their expressiveness throughout. You feel the emotions and its so detailed. As with the art, it all is stunning. Lots of vibrant colors and wonderfully orchestrated at making the Pridelands not just lush and vibrant. But so lived in and pretty.

And the music. From it's song and scores, it's aces across the board. All the songs are well written and composed. "The Circle of Life", "I Just Can't Wait To Be King", "Be Preparred" (IE Best Song on the soundtrack. And Disney's best villain song), "Hakkunah Mattatah", "Can You Feel The Love Tonight." All are wonderful and memorable in their own certain ways. Also used wonderfully at progressing the story and characters and their journeys.

The score is also top notch. Grand and sweeping and really helping with the mood in so many scenes. Well compised and all fitting the African prideland aesthetic. (Also good sound mixing and design)

So yeah... With all that... WHY'S THEIR A REMAKE?! (I know why. I'll give you a hint: 💰) it all just seems like an unnecessary waste of a potentially good resources that could be used towards something more original. Something I know Disney is capable of doing!

It's a shame really. But in all honesty, I'm still happy I have the original to watch for years and years to come. Sure you can be one of those "quirky" and pass this off as "overrated". But it kinda has good reason to be. It's a benchmark not just an animation but filmmaking in general. Up their with the likes of Akira, Spirited Way, The Iron Giant, Spider-Man: Into The Spider-Verse, Toy Story, The Secret of NIMH, and many more.
The Lion King is in some ways an animated Epic on all fronts and it really is a good one. One still witnessed and beloved by audiences today. One that, in my opinion, a cash grabbing remake couldn't dare fault.

This is the part of the review where I tell you to go watch it as soon as you can but there's a 99% chance you probably have. And hey. Don't want the live-action one? Stay in. As Jay Sherman once said:

If it's a remake of a classic, watch the classic.

25 years after its original release and many years since I've watched it as a child many times, I still adore this film.