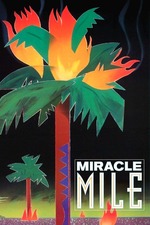 This still gives me anxiety every time I watch it. This is one of the most intense viewing experiences. Anthony Edwards is absolutely incredible here. Mare Winningham is good as well. And the Tangerine Dream score is excellent as always. This is a first rate thriller. I don't think a film this bleak could be made today.

Today when Arrow Video announced that they were releasing this on blu ray on Facebook, naturally I liked the post. Well then a bit later, the film's director Steve De Jarnatt sent me a friend request. A bit in awe, I sent him a message telling him how much I like the film. And he actually replied, thanking me for the support. He told me that he was reaching out to people who had liked the original post. And during a rough 12 hour shift at work, his reply made my day. What a class act.