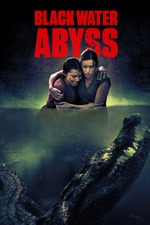 Hooptober Se7en - Film from this year

I figured I'd take a shot on this one since I loved the original, I'm such a sucker for a man-eating croc movie. A group of five friends go cave diving in a newly discovered cave system only to become trapped once a tropical storm hits and water levels rise while they are stalked by a croc. Our group is made up of the happy and kinda dorky couple, the couple with a rocky relationship, and the party guy fifth wheel who actually discovered the cave while looking for a couple missing tourists (seriously I get the thrill of exploring uncharted territory and claiming it as yours but leave a note or something so you can be found if things go south). I had almost given up on this one until the last 10 minutes, which nearly redeemed the meh feeling I was having throughout the film. There's some decent jump scares and great camera angles, it just overall wasn't as satisfying as I hoped.