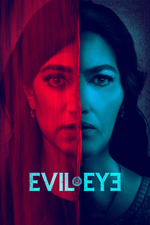 I was excited about this one because I really enjoyed the audiobook original on Audible but honestly I think this story works better in an audio format (audiobook was all phone/text dialogue between characters which oddly worked well). A mother keeps trying to get involved in her daughter's dating life (it's such a crime to not be married by 30) but when her daughter meets a dream guy, her mother suspects that he's actually spun from nightmares. It's predictable and not an original story but I thought the acting was pretty solid (Sarita Choudhury does a great job of playing the over-protective, slightly paranoid mom and I plan on looking into some of her other films - it seems to be a mixed bag of films like Lady in the Water, A Perfect Murder, and Admission but I'm all for it). As Pallavi and Sandeep's relationship gets closer, Usha sees more red flags than a drunken 2am football game.

Honestly if the story sounds interesting to you, listen to the audiobook, it's a better experience.