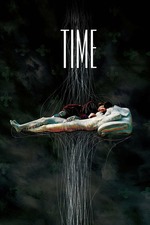 Ki-Duk Kim is rapidly becoming one of my favourite directors.This is only my 4th film by Kim but all are completely engrossing. 'Time' delves into the insecurity of relationships and the fate of modern identities; and is essentially a drama but borders on sci-fi at times. It's a very intelligent look at how modern youngsters are expecting their relationships to be just like everything else in their lives - instant, perfect and "switchoffable". But life isn't like that. The film is quite jovial and outlandish in tone despite some unhappy undercurrents, with the ending giving us a rather unexpected 'twist' of sorts. But it ties together this theme of time / perception / disposition being fixed and something that is not versatile.

The surreal quality that Kim uses makes us drift into this almost fable like movie. Although it's a relatively simple concept, it's hard to imagine any other industry would have produced this as well as the Asian film industry. Pedro Almodovar is the only other modern film-maker that I think could churn out something as well put together.

It was difficult to locate a copy of this movie, and it has never been given a blue ray release, which is a shame as some of the visuals are beautiful; especially those scenes in the sculpture park. But I'd recommend this film to anybody who likes Asian cinema and anybody who likes to be made to think a little.