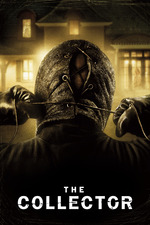 Visually and aurally arresting from the start, this is a loud and lurid home invasion slasher with a decent central performance, a pounding soundtrack and a lot of gore. Plus it's always great to watch something shot well on 16mm film, arguably horror's optimum format. However, you may struggle with the wild and unbelievable storyline. A burglar tries to rob a large family home while its residents are supposed to be away, but he finds them tied up, and the house decked out with all manner of traps: cheese wire strung from wall-to-wall, corrosive gunk and bear traps underfoot, an elaborate pulley system used to throw victims around the place, and more. Quite why or how the masked intruder responsible has gone to such lengths is never explained (maybe there are hints of something otherworldly, but nothing overt), so really you've got no choice but to buckle up and enjoy your tour around this macabre funhouse of splatter. Interestingly, the film was first conceived as a Saw prequel, and the massive suspension of disbelief the film demands might well have come easier had it been part of that pre-existing world.

The House at the End of Time