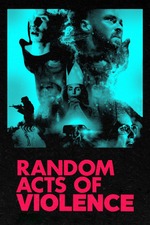 A regretful voice-over spews forth pretentiousness that only Neil Breen might envy: "Truth is the forced perspective that mutates the abstract into reality." You fucking hoser, Jay. You had to trick Telefilm into funding your slasher by pretending this was all so subversive, progressive or self-aware. Well you wasted some great gore effects on an underdeveloped script that just ends up being tedious even at a mere 81 minutes.

So let me subvert expectations here and mention The Bad Nun II: Deadly Vows, a low budget sequel with some genuine tension and a wholly creepy vibe. Impressive successor to the overlooked original British indie that needs to be discovered. It doesn't even yet have a proper listing on Letterboxd, despite being free to stream on tubi.tv. I recommend it for genre fans instead of this overly hyped Shudder original. [EDIT: The Bad Nun: Deadly Vows is now listed here and my review has been added]