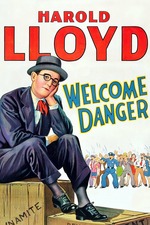 Disliked by his colleagues on the force, the pedantic son of a famed police chief is given false leads on a drug smuggling operation, which leads to much mayhem in this Harold Lloyd comedy. This was Lloyd's first talking picture and the Safety Last! star does well handling his audible dialogue, however, the early sound recording technology is not quite up to scratch. Noise levels vary dramatically between (and sometimes within) scenes, and while there is one great sound-related gag in which Lloyd unknowingly sits on an accordion, the movie mostly fails to take advantage of the sound process. Lloyd's best bits remain silent/visual gags, such a pulling a man by his binoculars and finding a way to make a crying baby laugh. The plot is a bit all-over-the-place too with over half an hour elapsing before he even joins the force, while scattered title cards left in only bring to mind how superior Lloyd's silents were.