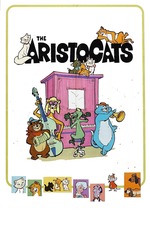 Who would ever leave everything in your WILL to your CATS? A crazy cat lady, that's who. The Aristocats is a classic Disney film. It's not a five-star classic, but it is a fun film and makes for good entertainment. It is somewhat a light refreshment from the darker, more serious Disney classics. The Aristocats tries to be a light-hearted musical comedy, and I think it just about succeeds. The storyline doesn't make much sense, and I don't think the plot is particularly strong, but it is certainly not weak. The animation and backgrounds are a bit scratchy in places, typical of Disney's 70s films, but it does have a rustic, old fashioned charm about it.

The Aristocat's strongest points are the characters, the music, and the humor. The music is very memorable - try getting 'Everybody Wants To Be A Cat' out your head in a hurry! The songs are written by the Sherman Brothers, who also made the music for The Jungle Book. The bottom line - The Aristocats might not be Disney's crowning achievement or even their strongest film from the 70s, but it is an enjoyable film and is sure to entertain. It is a charming and lovable film, and it's impossible to dislike.