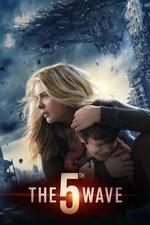 I'm a fan of the book that this film is an adaptation of and if I was the author, I would be wanting this mess erased from plant Earth. This film takes a well structured novel and butchers it into a dumbed down Hunger Games-esque mess. I actually paid to see this film in the cinema with my book club after we'd read the book. After this re-watch I wonder why I bothered to waste that money.

The 5th Wave follows mankind as it begins to fight back against extra-terrestrial beings who they have nicknamed "The Others". "The Others" have struck humanity down with 4 previous waves in order to wipe out the human race. The protagonist of the film is Cassie who has made it her mission to rescue her brother who, along with the other children who survived the 4 previous waves, has fallen into the hand of "The Others". A subplot follows some of the other survivors as they are trained up as humanity's last hope against "The Others". The source material for this film is an excellent novel that has well developed characters and a slow burning story. This film is none of that. The script is awful. There are so many moments that are important to the story in the book that have been cut out in order to make this film a generic young adult film. This is a huge mistake as these key scenes were important in the book as they help to build up the relationships between the multiple characters as well as provide justifications for their actions. The dialogue throughout the film is terrible. The dialogue in the book is smart, witty and occasionally funny but in the film, its like someone has butchered it to make it fit the cringe worthy dialogue from many other young adult films. The film also doesn't allow any of the characters to have any real development. Because of their situation, the characters have to make some incredibly difficult choices. In the book, we see how these choices affect the characters and how they are changed by what has happened to them. However, the film completely throws this out of the window, making the characters feels more like card-board cut outs than real people. The humour also fails to land to the point where it just feels painful.

The film has a pretty good cast. However, they are given absolutely nothing interesting to work with. A number of the actors in this film also seem to have just turned up for the money as they put in little to no effort into their performance. Chloe Grace Mortez appears to have taken a leaf out of Kristen Stewart's book as she has the same expression and reaction to everything. It some of the worst acting I've seen as her performance is awkward and has no variation. This criticism can be applied to most of the cast unfortunately. However, a few cast members actually try to put some effort into their performance. Nick Robinson, in particular, tries to give his character some depth. For example, the way he acts in some scenes gives the impression that some off screen events have had an impact on him and how he deals with the new situation that he has found himself in. Liev Schreiber is also really good in his role and suited it very well. However, the lack of good material really does hinder their performances.

The 5th Wave is directed in the most uninspired way possible. Every shot is bland and the there is nothing that really draws the eyes of the audience to any scene. The way the film has been directed build no real tension in any scenes. The editing is a mess and the sound design draws way too much attention to itself. The music also feels like its trying to be Hans Zimmer but just fails to the point where I wish they had got Hans Zimmer in to the music. The 5th Wave also has some truly awful CGI which distracts from any other action going on the scene.

Overall, The 5th Wave is a disaster of a young adult movie. It takes great source material and butchers it beyond recognition. Aside from the odd action scene and two or three performances, there is nothing in this film that I would dare class as being average let alone good. This was a book that I was interested in seeing given the film treatment. However, I really wish they hadn't bothered at all. Read the book instead and steer clear of this shit heap.

He Snoops to Conquer