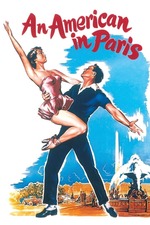 A winner of 6 Oscars that has been called overrated in many film circles, I actually quite enjoyed this very scenic, light breeze of a musical romance. Is it really the best film of the year? No, probably not (my two favorites as of now weren't even nominated), but the Oscar selection pools are always so limited, subjective, and prone to trends and political influence that they aren't a very consistently legit measurement of anything at all, in my view. More importantly, is it a highly watchable film with a basic plot that also holds up outside of the musical structure? You bet! This is an important film factor that a surprising amount of musicals have a hard time truly claiming.

Part of the discussion when viewing this film in the present day will always be a comparison to Gene Kelly's vehicle from the following year, Singin' in the Rain, another musical movie with Oscar presence, but one failing to garner any wins and being snubbed from a nomination in the best picture category. I can see why sour grapes might develop in comparison to Kelly's film from a year earlier. Most of the film community now agrees that Singin' in the Rain is not only the better film, but it is frequently noted as perhaps the best musical to have been made. Singin' in the Rain truly is spectacular: a near perfect film with great humor and an enduringly interesting story about old Hollywood's sound film transition that still holds up well when reviewing film history. I don't want to make this review isn't about how incredible Singin' is, so let's go back to talking about the film at hand.

An American in Paris is playing the checkers to Singin's satirical chess. It's a simple love story, not really fleshed out in any meaningful way, but one that still gets by well on pure charm and romantic appeal. I'd call it a love triangle (or perhaps a love square), except the lines of those shapes don't really connect here. This is more just like two relationship pairs of well-meaning people that have bad communication skills and fear of commitment and responsibility. It's just two jagged lines: two closely set jagged parallel lines that somehow may intersect for a moment when passion causes a line to spike. Gene Kelly's American character is pretty much an instant hit and friend to all with the surrounding French community, so there's very little added social context or drama here. The film also doesn't take much advantage of "fish out of water" comedic opportunities. There are charming moments, such as Gene Kelly singing with local French children, giving them bubblegum and teaching them English words, but otherwise, it's easy to forget that his character is even a foreigner. Everything is beautiful and pleasant to view for the Parisian setting, which was actually mostly just prepared Hollywood sets for the streets with some B roll Paris footage, from what I can tell. The accomplished director Vincente Minnelli (The Bad and the Beautiful) keeps things moving at a pretty nice pace throughout. I think the film really only bogs down a bit during a somewhat long-winded instrumental daydream dance number in the third act. Even this part of the film is still as impressive in being the most visually dynamic part of the film and giving vibes of surreal magic that would be explored again in SitR.

I have no problem with the work done by anyone heavily featured in this cast, but this is really Gene Kelly's film. He has the charm turned up to 110% percent here, both as a romantic character, as a modest dreamer of an artist and in his musical dance performances. Of the things that I've compared between this film and SitR, his performance in both films is probably the thing on a most even tier of quality.

If you enjoy a simple breezy romance with some nice tunes, this is a pretty surefire crowd pleaser. It's not a revolutionary film, and I don't think it always goes the extra mile, but it's undeniably pleasant, if you take it for what it means to give.