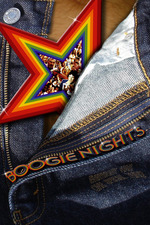 Every frame of this is pure entertainment, which is something that can rarely be said of a 2.5 hour film. In lesser hands, this type of semi-taboo story and material could have very well faltered into mediocrity or sillyness, but PTA knocks this out of the park per usual, with style and zest. This is a drama, by genre listing and in overall framework, but it is full of humor, life and awkward energy, just like the best comedies.

The ensemble cast is really strong. I saw that Burt Reynolds and Julianne Moore received supporting Oscar noms, but honestly in this type of film, the entire ensemble cast was so equally good that I don't think they really stood out that much more than anyone else. Don Cheadle, John C. Reilly and Luis Guzmán had me laughing a ton, and Wahlberg's lead character is so pure and easy to follow along his meteoric rise. Also, this soundtrack is everything! Strong rewatch value. As of now, I'm slotting this as my second favorite film from 1997. Highly recommended unless you are a boring prude.