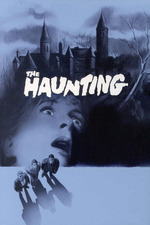 I'm not much of a reader, but I've now become pretty well-versed with the Hill House material conceived by Shirley Jackson through the various film and TV adaptation approaches that I've seen to the novel and other related material. Completely setting aside the unfortunately silly 90's remake of The Haunting, Mike Flanagan's TV miniseries The Haunting of Hill House was a recent masterful horror/drama combination that repurposed some of the character names and ideas of this novel/film story into a generational time-hopping family drama coinciding with the house's dark history. We also have the extremely similar "Hell House" novel by Richard Matheson, whose 70's film adaptation The Legend of Hell House remains an extremely underrated gem within the retro horror community with similar themes and character types as found in this film. I thoroughly recommend that one to fans of this film. I actually found TLoHH to be slightly more atmospheric and scary than The Haunting, but the 1963 version of The Haunting REALLY shines in its strongly acted and defined group of main characters, its very subtle approach to the horrors of depression, isolation and a lack of belonging within the mind (OR MAYBE JUST LEGIT POWERFUL GHOST HOUSES dudeeee...), inventive cinematography, and very iconic intro/outro pieces.

Even amongst its period contemporaries, The Haunting is never quite as tense or scary as you might want it to be in the scare set pieces, but it does so many other things so well from a drama and psychological horror perspective. I struggle to think of another retro horror film that put so much care and detail into defining four distinct lead characters and their various mindsets and goals. Julie Harris often gets a lot of respect for an excellent performance in the chief lead role, and rightfully so, but the entire lead cast is just wonderful. Claire Bloom is constantly mysterious and enchanting, alternating between states of flirtatious confidence and the purest of sudden fear. Also, she's playing a lesbian character in a 60's film that is neither portrayed in a negative light nor exploited, so that's pretty damn awesome, too. Richard Johnson plays the confident doctor figure organizing the experiment with a bold and controlling vigor. You always wonder what his true intentions are. Does he truly believe in the supernatural? Is he gaslighting his subjects? Does his character even have an arc or is he controlling the arcs of others? Russ Tamblyn (aka the beloved weirdo Dr. Jacoby from Twin Peaks!), who previously worked with director Robert Wise on the excellent West Side Story musical film, is a confident skeptic and would-be ladies' man who continually tries his hardest to hold to his youthfully stubborn beliefs. All of these characters are almost equally engaging, despite Harris being the ostensible star. No... scrap that. The house itself is both the lead character and the star. It's a credit to the lore that this novel/film creates that one can even feel that way.

Both the house set and the filming style are just as engaging as the characters. There's a TON of wide angle filming in this, which coincides wonderfully with a visual gimmick contained within the script itself. Hill House was designed, in story, in a very askew manner. Doors are off center, angles are unexpected, and very few walls provide a typical right angle at many points to give one a normal sense of body balance alongside another vertical object. The filming is done in a way that accentuates these odd room shapes and helps give the film a nice surreal and dreamlike quality. I really dig the way this film gives the house so much illusion of power despite not actually doing that many truly scary things. So much of this is done with the way that it is filmed, the atmospheric expositional house lore and the inevitable powerful conclusion of the story. It's a nice little creepy October watch. As long as you go into this expecting subtlety and interesting characters more than waiting for ultra-tense jump scares, you'll likely have a nice time with this well-aged film.