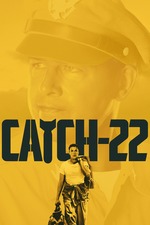 For some context, the book is one of my favorite books ever. It is also a very hard book to adapt to screen because of the nature of the narrative. Heller seals character fates in a nonchalant and unremarkable manner (usually only in 1-2 lines) to drive in his point about the absurd nature of war. Sometimes, he does provide context but only in later chapters - resulting in a far greater impact than a linear narrative would have had.

Naturally, it's very tough to show character deaths on-screen (specifically speaking of Clevinger's fate) without treating them as a tragedy - and doing that takes away some of the essence of the book. If they aren't treated as a tragedy (on screen), viewers who have never read the book will never really feel the impact lol. I find it funny how adapting Catch-22 is basically a 'Catch - 22' situation.

That said, this series is a pretty good and as faithful as possible an adaptation. Naturally, it diverges from the book at times - sometimes these diversions fail, for e.g. - the Italian village sequence in the finale serves absolutely no purpose in addition to being tonally inconsistent - and at times these are an astounding success - specifically Clooney's filming of the cockpit sequences overwhelms you with claustrophobia which ultimately results in one of the most harrowing sequences of the series (faithfully adapted from the book).

Also, hats off to Christopher Abbott, he plays Yossarian perfectly - Yossarian's conflicted morality in order to preserve his sanity in the face of military madness is what defines him- and Abbott absolutely aces the role.

There are a few issues though - 1) At times, the characters aren't really developed enough before the showrunners set them up for something big, and as a result too much depends on the score (which is great btw) and acting. 2) The ending, GODDAMNIT WHAT IS THE DEAL WITH THE ENDING, IT COMPLETELY MISSES THE POINT. WHY DID THEY CHANGE HELLER's ENDING?