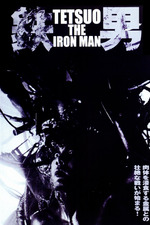 This has been on my radar ever since I made a list of bloody/gory/disturbing films on IMDb back in 2012... how edgy of me. However, like many of the other films on that list, I never got around to this film and was very excited to get the chance with this list, almost felt like a blast from the past though I had never seen it.

Nevertheless, there is something familiar about watching Tetsuo, even while it manages to be a thing entirely of its own. The familiarity, I think, arrives from the close relationship between the aesthetic Tsukamoto develops for himself and that of the industrial scene, traceable all the way back to Throbbing Gristle's early releases. In the crisp and gritty contrasts that dominate the screen throughout the film, lies the grainy quality that defines much of the accompanying visual art of the music genre. In the mechanical and ferric motifs, lie scenes that look like they could be the cover of a Hunting Lodge or Controlled Bleeding release, if they're not depicting the instruments used to make the music. With a complementary soundtrack by Chu Ishikawa, this becomes, to me, the cinematic embodiment of industrial.

Further, there is clearly a rooting in the Japanese avant-garde in terms of plot leniency and symbolically free associative editing, an avant-garde that since the new wave had continued to develop towards the more extreme. With an underground finish, there is something magical about what Tsukamoto accomplishes. Perhaps not breaking any boundaries narratively, but certainly visually with a hyperactive editing and a camera shaking as though the majority of the process of filming was plagued by earthquakes. The cyberpunk aspect doesn't fascinate me as much as the industrial, though I will say it certainly isn't hard to see why people think of Akira when seeing this, though I actually think the imagery serves the purposes of the story better here. A supremely arresting experience.