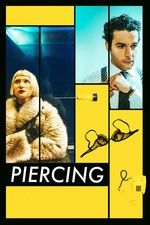 Piercing is a 2018 horror film written and directed by Nicolas Pesce and follows a man who plans to kill an unsuspecting prostitute.

Peace’s direction is great, the editing and performances are top notch and the inclusion of Goblin’s Tenebrae is the cherry on top but still I can’t help feeling a little let down.

I’ve only seen Pesce’s most recent work, the abysmal The Grudge film, and whilst this is a million times better it still lacks some focus and a compelling narrative, though it is an adaptation so Pesce isn’t completely at fault here.

The film’s pacing is fast but I feel it has very little room to flesh out its characters or even set an atmosphere, lacking a lot in the horror department asides from the occasional squirm moment.

Overall, Piercing is a fine, if unremarkable movie.