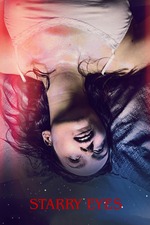 “Ambition - the blackest of human desires. Everyone has it, but how many act on it?”

Starry Eyes is a 2014 psychological body horror directed and written by Kevin Kölsch and Dennis Widmyer and starring Alexandra Essoe as a hopeful young starlet who finds that fame's price is not always easily paid.

An exploration into the seedy underbelly of Hollywood, Starry Eyes is deeply unsettling as we watch Sarah (Essoe) deteriorate, both physically and mentally in the film, leading to a climax where she is now essentially ‘perfect’.

It’s a bleak ending, and Sarah’s transformation may not have been convincing if anyone other than Essoe, who gives a dedicated performance, was in the role.

Whilst not your typical Cronenberg-style shocking body horror, Sarah’s transformation is nonetheless horrifying as she becomes essentially a perfect doll by the end.

Considering this was crowdfunded, the low budget rarely shows, and both of the directors do a pretty good job with the film.

If I have any complaints, it’s that the side characters were a lot less dynamic and the movie’s pacing does dawdle a lot in the middle, leading to a somewhat rushed climax but overall, I really enjoyed this intense Black Swan-esque film, especially with Jonathan Snipes’ thumping score.