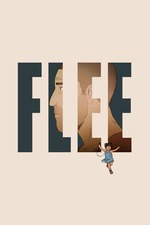 There’s no denying the ingenuity and noble intent of Flee. This mostly animated documentary tells the heartrending, and deeply human, story of a young man who had to flee Afghanistan. It is a beyond worthy story, a gripping one that touches on so many brilliant themes (including an excellent approach to the subject’s homosexuality, and how that (tragically) further complicates his narrative).

The animated approach gives a necessary anonymity, allowing the tale to be told. It also grants us access, visually, to things that would never be documented. However, it also limits the film. The technical limitations of the approach lessen the overall work and, though definitely not the intent, the visual realisation does make things feel fictive. The cartoon reality diminishes the actual reality, presenting a barrier between the viewer and the truth.

Yet, the approach does really offer something. The documentary field is inherently limited by what is actually documented. This is a limitation enforced by privilege and positioning, in which things as simple as access to equipment (and wider resources) will forever restrict what true stories we will see on our screens. There were no cameras following our subject, no personal footage to use to construct a document. Yet, the story is still documented and brought to life. By animating the stories told in an interview, the backbone of this feature, we get to see what we could otherwise never see.

This approach highlights the transportive power of cinema, and there is real power and relevance to seeing these lives on screen. At points, we cut to archive footage (live action). These moments give important historical context but, in their visual juxtaposition, remind us that only the broad scale is truly documented, and that the human impact is not covered by the lens of history.

For all these reasons, and because of an excellent soundtrack, Flee will work so well for so many people. There is such value to its narrative, a personal story that gives important and empathetic insight into issues we must confront. Yet, for many, the approach will also be a limitation. Alas, I fall into that latter camp. First of all, the animation itself is distracting. The animation is quite low-frame rate, with stilted movement that is jarring to watch, especially when it is serving as a surrogate for reality.

At points, we get more expressionistic visuals, charcoal sketches or impressionist outlines. These sections are the film at its strongest. When it is just reflecting a reality through animation, it diminishes that reality. It looks off in a way that connotes something fictive, diluting impact and creating distance. When it steps away from being an animated mirror, and instead evokes through a more subjective mode, it is a work of real power.